the end of this version of the story

After several years of sometimes dedicated and other times random intervals of blog postings I am closing down this site.  I plan to devote more time to keeping an updated website of work and perhaps sending out a quarterly newsletter.   Thank you for your virtual presence in my life over the years and encouraging comments.  Please visit my website: http://www.michellesaffran.com/ 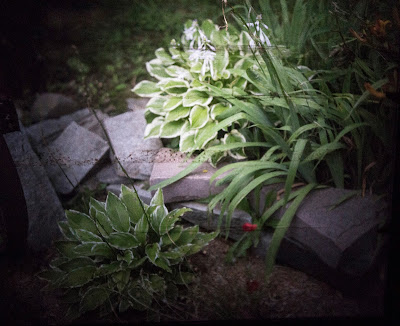 Posted by michelle saffran at 10:48 AM No comments:


I started the evening with the very good intention of photographing everyone who came but, as with most good intentions,  I lost track of my mission sometime after the first hour.  Thank you to everyone who came to the reception for Mediating Memory at Axel's last Friday night.  I apologize to those of you who weren't photographed, but perhaps you are just as happy to have escaped me!

This being the first time I showed the Heirloom series I was nervous but delighted to hear everyone's comments.  During the artist's Q & A I was asked, Why twelve (meaning why was my series based on the year I turned twelve)?  To which I said,  it was a year of transition from childhood to teenage/quasi-adulthood and I was becoming more and more aware of the political, social and environmental upheaval in the world around me.  The year was 1969 and as I turned my attention away from my immediate family I witnessed how the world around me was changing, being transformed through race riots, war protests and environmental disasters.  This sensitivity to national events would come to shape my conscience and attitudes permanently.

The Heirloom quilt pieces deal specifically with how my newly formed global interests affected my role within the family, specifically my relationship with my mother.  She began losing her position as center of my universe and lacked the experience of how to navigate that uncharted territory.  Heirloom is a reflection of the confluence of cultural and personal forces that moved into my family relationships.
Posted by michelle saffran at 8:43 AM No comments:

This Friday, August 12 from 6 - 8:00 pm there will be an artist's reception at Axel's Gallery in Waterbury for Mediating Memory.  I invite you to come and see Heirlooms and Nuclear Family along with my friend Amy Hagberg's stunning and haunting pinhole camera work. 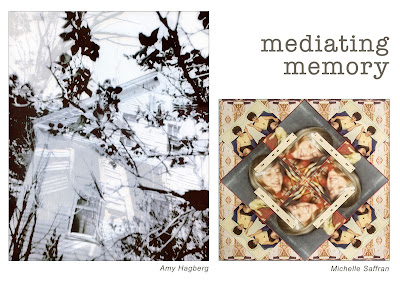 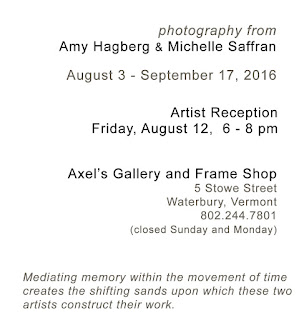 I am pleased to tell you that I have been awarded a Vermont Arts Council Creation Grant funded by The National Endowment for the Arts.  This grant will allow me to devote more time to my work, specifically the Remembering Our Future Death series.  I will be showing the series at several points throughout the upcoming year and will let you know when and where as the shows approach.  I offer up a huge THANK YOU to the Arts Council and The National Endowment for the Arts!
Posted by michelle saffran at 9:53 AM No comments:

This is where I started nearly three months ago: 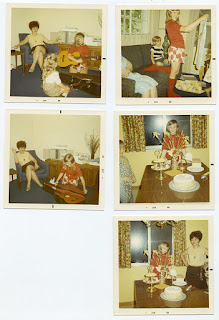 And this is where I am today, complete with final titles:


The Heirlooms will be showing at Axel's Gallery August 3 - September 17 with a reception on Friday August 12, 6 - 8 pm.  I look forward to seeing you then!

Posted by michelle saffran at 8:34 AM No comments:

I set out to make five photo-collage quilts, a number that matched the projects five source images.  I think I'm done (with this chapter anyway).  Over these last few months I made many more than five pieces but eliminated those that didn't fit the story or had become overly complicated to the point that they were more about design than narrative.

Come see the final series at Axel's Gallery August 3 - 17.  Hanging with the Heirloom Quilts will be the Nuclear Family series, along with a few surprises!  Showing along with my work will be the haunting and enigmatic pinhole camera photographs of Amy Hagberg.

I look forward to seeing you at the artist reception on Friday night August 12, 6 - 8 pm.


Posted by michelle saffran at 9:59 AM No comments:


My work continues on the series of paper quilts for the 1969 series.  I Wanted To Sing Like Joni Mitchell and Before We Disappointed Each Other are the two most recent images pieced together from that same group of 5 snapshots (all taken at my twelfth birthday party) that the earlier two quilt pieces were made from.  My goal is five new pieces to mirror the five originals.  Forcing myself to meet this goal has pushed me to look and look and look again at the same few snapshots and dig beyond their surface to see what else may be there.  On the face of it these source images seem to deny a deeper exploration.  They are simply what they are, yellowed with age poorly composed records of one evening forty-seven years ago.  The longer I study the snapshots the more detached I become from them.  Its like repeating a familiar word over and over to yourself until it becomes strange and removed from its meaning.  Searching the faces and analyzing the gestures of my family and preteen self I find no meaning, locate no memories.  In a sort of backwards projection these snapshots have become a repository for everything I now know.  Their meaning comes, not from what they literally recorded, but from all the events of my life that came after that night.
Posted by michelle saffran at 11:43 AM 1 comment: